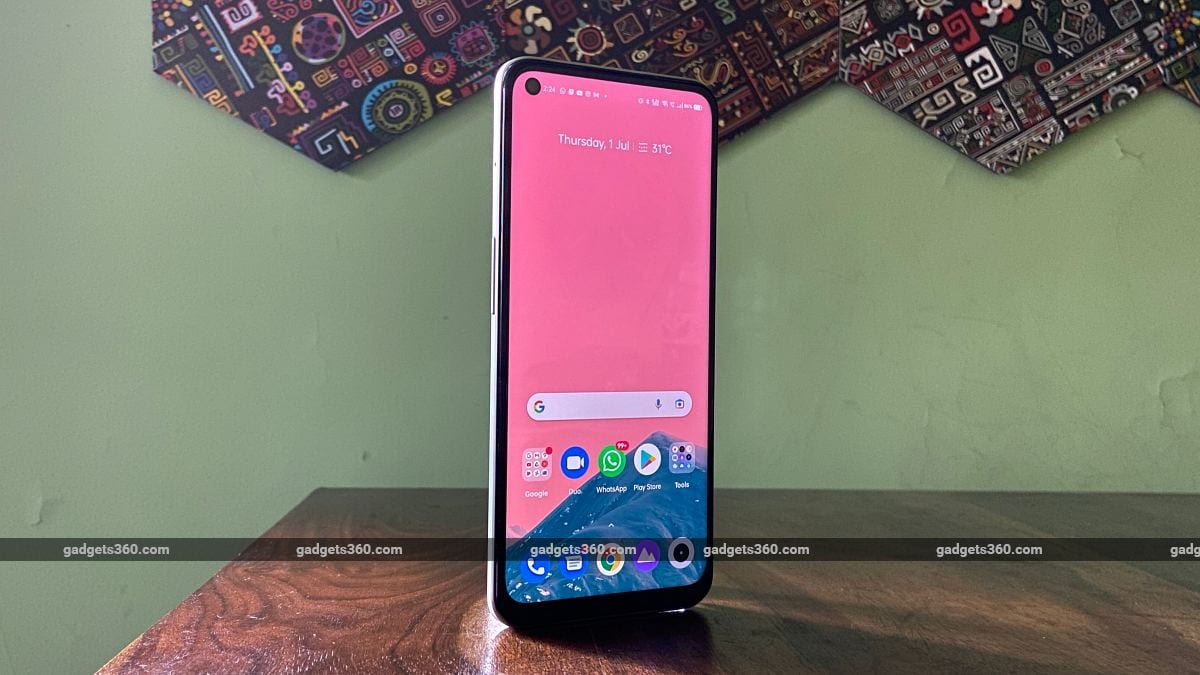 5G consumer networks are not yet operational in India. As a feature, 5G first started to appear in high-end smartphones, then made its way into the mid-range and has now entered the budget segment. The addition of 5G compatibility has pushed up the prices of many smartphones. In the budget segment, manufacturers have cut corners in other areas in order to keep smartphone prices in check. Processors that support 5G modems (add-on or built-in) cost more than 4G ones, which is why manufacturers must choose carefully how and where to compromise. Buyers also need to decide what they prefer.

Some manufacturers such as Xiaomi have so far ignored 5G in their low-cost offerings, while others, such as Motorola and Realme, have tried to integrate this feature into some of their budget smartphones. Motorola was one of the first, with its Moto G 5G, available at Rs. 20,999. Realme broke through budget barriers by launching the Realme X7 5G (Review), followed by the Narzo 30 Pro 5G (Review), from from Rs. 16,999. Now Realme is aiming even lower with the Narzo 30 5G, which was recently launched alongside the Narzo 30 (Review).

The Narzo 30 5G looks slim and seems to contain all the specs one would want in this price segment. Is it perfect and is it worth choosing it over the Narzo 30?

Prices and variants of the Realme Narzo 30 5G

The Realme Narzo 30 5G is thin and light and offers a good grip with its edges defined around the frame. The smartphone weighs 185g and is only 8.5mm thick. The back panel of the Narzo 30 5G has an identical layout to that of the Narzo 30, but with an off-center shimmering strip running across the back. The Narzo 30 5G is available in two finishes: Racing Blue and Racing Silver. I received a Racing Silver unit for review, and it has a glossy rear panel. The build quality is quite good. The plastic back panel doesn’t flex or squeak, but it does pick up fingerprints and is a dust magnet.

The 6.5 inch LCD panel looks crisp and gets quite bright on the outside. He has relatively thin bezels at the top, left, and right, but thick at the bottom.

The Realme Narzo 30 5G uses a MediaTek Dimensity 700 processor, which is the same one you would get with the Realme 8 5G and the Poco M3 Pro 5G. It has a built-in 5G modem which supports multiple 5G bands and offers 5G dual standby. The Narzo 30 5G is available in a single RAM and storage configuration, and uses LPDDR4x RAM and UFS 2.1 storage. Connectivity options include dual band Wi-Fi ac and Bluetooth 5.1. The Narzo 30 5G offers a three-slot tray with room for two Nano-SIMs and a microSD card up to 1TB. The device has a 5,000mAh battery and supports 18W charging. .

The Narzo 30 5G runs Realme UI 2.0, which is based on Android 11. It looks clean and performs well, but there are also several preinstalled apps. All third-party apps can be uninstalled if they are not needed. The HeyFun app and the native Browser app frequently send promotional notifications, but these can be silenced in the notification settings.

The Narzo 30 5G’s display became quite bright at 600 nits and was readable in direct sunlight. However, the protective glass, like the back panel, got dirty easily during daily use. The screen offers two screen color modes to choose from – Soft and Vivid. I preferred the Soft Color preset, which showed more natural colors, over the Vivid preset, which seemed a bit too saturated. With a screen refresh rate of 90Hz and a maximum touch sampling rate of 180Hz, the screen responds to touches and swipes without any lag during gaming.

The Realme Narzo 30 5G performed well in most benchmarks and surprisingly outperformed the Poco M3 Pro 5G in most of them, albeit by small margins. The phone scored 3,62,007 in AnTuTu, as well as 574 and 1,777 in Geekbench’s single-core and multi-core tests respectively. Compared to the Narzo 30’s Helio G95 SoC, the score difference was minor.

Gaming was a decent experience on the Narzo 30 5G with most games running fine on default settings. I didn’t experience any heating issues like on the Narzo 30 which potentially makes the Narzo 30 5G a better choice for gamers. Call of Duty: Mobile ran smoothly but was limited to medium graphics settings and high frame rates, with most effects like Ragdoll, Bloom, and Antialiasing not available. Asphalt 9: Legends performed quite well with only a few dropped frames at the default graphics quality. The game was also playable in high quality, but would struggle a bit when there was a lot of action.

The Realme Narzo 30 5G has a single bottom-triggered speaker

The Realme Narzo 30 5G offers good battery life for such a thin phone. During the review period, it easily lasted me a day and a half with general use, which included a few hours of streaming video, browsing social media apps, taking a few photos, and playing games. . Our HD video loop battery test also showed good results – the phone managed to run for 18 hours and 36 minutes. Charging was a bit slow compared to most smartphones in this segment, with the Narzo 30 5G hitting 28% in 30 minutes and 53% in an hour. A full charge took 2 hours and 10 minutes.

The Realme Narzo 30 5G offers the exact same triple rear camera setup as the more affordable Narzo 30. There is a 48-megapixel f / 1.8 main camera, a 2-megapixel monochrome camera, and a 2-megapixel macro camera. Selfie tasks are handled by a 16-megapixel f / 2.0 front camera. The camera app interface is typical of what’s available on other Realme devices that run Realme UI 2.0, with all the important controls available right at your fingertips.

The Realme Narzo 30 5G has a triple rear camera configuration

Photos taken in daylight are crisp and quiet, but a bit saturated. The dynamic range was good, showing a decent level of detail in the darker areas of the frame, but there was noticeable purple fringing in the brighter areas. Oddly enough, the textures didn’t look as defined as in photos taken with the Narzo 30. The Narzo 30 5G’s camera setup also offers 2X and 5X digital zoom. Cropped photos showed less detail and dynamic range at 2X, while those captured at 5X ended up looking like oil paintings. The 2-megapixel macro camera took decent photos with passable detail, but the colors were quite different from the actual subject. Maintaining the perfect distance to an object using a fixed-focus camera will be difficult, especially if you have shaky hands.

As expected, low light performance was not good. The scenes were well exposed, but the textures were flat even under street lighting. The rear camera produced noisy and murky photos unusable when shooting low-light landscapes. The usefulness of Night mode was limited, as it only increased the brightness by a small margin, bringing out a bit more detail in the darker areas of the frame.

Video recording on the Narzo 30 5G was a bit of a letdown, even compared to what the Narzo 30 was able to capture. The phone allows for a maximum capture resolution of 1080p @ 30fps when using the main rear camera, which is disappointing for a smartphone in this segment. The camera took its time to lock focus, so most of the video captured in this review was out of focus and overexposed. In dimly lit scenes, the camera found it even more difficult to focus, and the captured videos seemed quite blurry and unusable.

The Realme Narzo 30 5G is a slim 5G smartphone with a good 90Hz refresh rate display, excellent battery life, and mid-level gaming performance. After using it for a week, I was not very happy with the average photo quality and below average video capabilities of this smartphone. Charging it at 18W was relatively slow. Even the Narzo 30 offers slightly better camera performance and more options for shooting videos. Realme managed to deliver a 5G smartphone with 6GB of RAM and 128GB of storage for Rs. 15,999, but I expected better.

If you need to get a 5G smartphone right now, it would be worth spending the extra Rs 1,000 to get the Realme Narzo 30 Pro 5G (Review) instead. At Rs. 16,999 for the 6GB RAM and 64GB storage variant, it offers better value with a 120Hz refresh rate display, Dimensity 800U processor, and 30W fast charging.

If 5G isn’t a priority for your next smartphone purchase, I would recommend the Redmi Note 10 Pro at this price point. It offers a better selection of cameras, a Super AMOLED display, and 33W charging, along with a slightly larger 5,020mAh battery, for the same price. If you take a closer look at stock Android, Motorola’s G40 Fusion at Rs. 16,499 (6GB RAM + 128GB storage) is another option with the same Snapdragon 732G SoC as on the Note 10 Pro, but with a Bigger 6000mAh battery and water repellent design.

Don’t fall for the Supremo scam – BC Catholic

I started using Continuity Camera on macOS 13 Ventura, and now I can’t go back

How to take a screenshot on your iPhone, iPad or Apple Watch