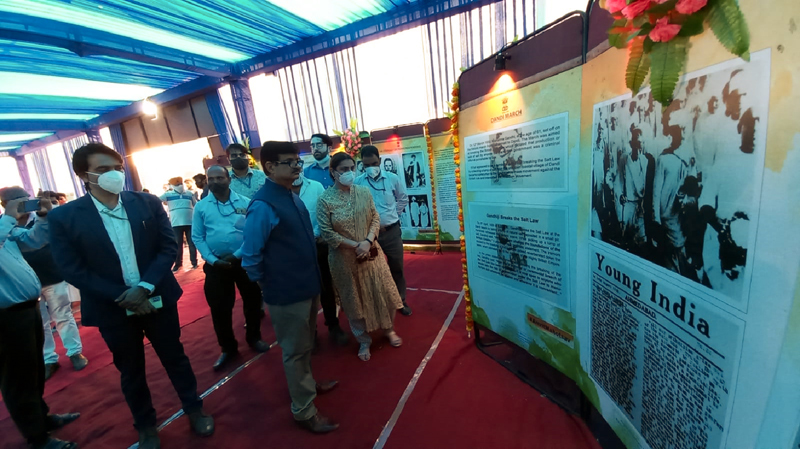 Excelsior correspondent
KATRA, October 8: Regional Outreach Office, J&K, Ladakh Region, Ministry of Information and Broadcasting, Government of India today launched an eight-day multimedia exhibition on “Azadi Ka Amrit Mohatsav” at government upper secondary school, Katra.
The multimedia exhibit was opened by Satyendra Prakash, Senior Managing Director, Bureau of Outreach & Communication, Ministry of I&B.
Speaking on the occasion, Satyendra Prakash said that the main objective of these multimedia exhibits on Azadi Ka Amrit Mohatsav is to showcase the contribution of freedom fighters. He added that besides the main freedom fighters of the Indian Freedom Movement, unsung heroes have also found a special place in these exhibitions organized by regional outreach offices across the country.
Prakash stressed that every citizen of this country should participate in these multimedia exhibitions organized on Azadi Ka Amrit Mohatsav to make him a “Jan Andolan” so that people are informed about the sacrifices made by the freedom fighters. He also said that the other aim of the conduct of these exhibitions by the regional outreach offices is to showcase regional freedom fighters so that the local population is made aware of their contribution during the freedom movement. Today’s exhibit also featured freedom fighters from the Himalayas, including Brigadier J & Klike Rajendra Singh, known as the “Savior of Kashmir”.
Prakash also focused on strengthening the Office of Outreach and Communication’s virtual community network, especially through social media, so that the message carried by these exhibits reaches every household across the country.
Neha Jalali, Co-Director of Regional Outreach Office, J&K, Ladakh Region, said on the occasion that these exhibits on Azadi Ka Amrit Mohatsav will certainly instill the spirit of the campaigners linked to the struggle for freedom and be a tribute to the freedom fighters who sacrificed their lives for the freedom of the country.
Besides students, artists and other audiences, the exhibition was attended by Amit Kumar, Co-Director, BOC, New Delhi & Ambika Soni, AD Tourism, Katra, Manik Singh Rathore, Undersecretary, Transport, Miss Ranjit Kour , State Tax Officer who are Special Duty Officers on Navratara Festival and Sheikh Mudasir Amin, Media and Communications Officer, PIB Jammu.
The exhibit included rare photographs, video clips, a touchscreen, photo collage, and audiovisual consoles about freedom fighters. Vintage photographs of freedom fighters and important movements during the freedom struggle were also included in the exhibition.
The multimedia exhibit also included display racks, selfie corners, and interactive games to engage audiences. In addition, a competition was organized on the occasion. The inaugural ceremony also included cultural programs involving cultural troupes from Himachal Pradesh, Rajasthan, Maharashtra and Odisha.