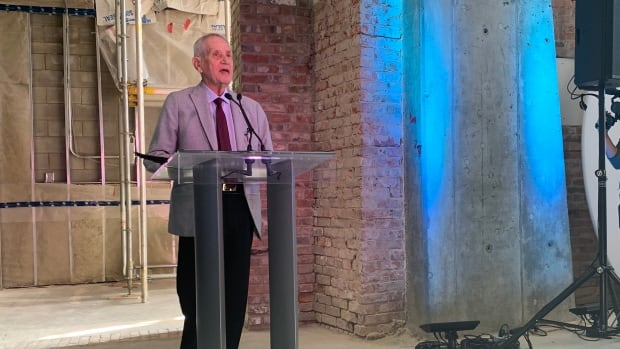 World-renowned architect Douglas Cardinal was in Edmonton on Friday to share a preview of his multimedia art exhibit that brings together the past, present and future of the Indigenous experience.

Unceded: Voices of the Land features the work of 18 different Indigenous architects from across North America.

“I think it will be an opportunity for people to see our indigenous culture, to live it and I feel helped to have better communication between our two peoples here”, said Cardinal who addressed the guests of the building. Recently restored and historically designated Pendennis. on Jasper Avenue.

The exhibition, which debuted in Venice in 2018, was presented at the Venice Architecture Biennale. Most recently, he concluded an exhibition at the Canadian Museum of History in Ottawa in February 2021.

Edmonton exhibit showcases the sites and stories of Indigenous architecture

Unceded: Voices of the Land is an immersive and interactive exhibit that shows the unique perspectives that Indigenous architects bring to their work. 1:27

â€œWe are delighted to host the Unceded: Voices of the Land exhibition by world-renowned architect Douglas Cardinal, which is making his debut here in his home province,â€ said Lorraine Bodnarek, co-owner of Pendennis Hotel Development.

“We think it will be extremely educational. I hope anyone who experiences it will learn more about the history of indigenous peoples,” she said.

The exhibition is described as a visual extravaganza.

Videos are projected onto curved walls and consist of natural imagery, ranging from deep, lush forests to Indigenous percussionists participating in ceremonial chants.

â€œThis is an immersive interactive exhibit, so you’re really immersed in the exhibit itself,â€ said Louis Cardinal, Edmonton co-lead for Unceded in Edmonton.

“It’s filled with sounds, sights, stories, wonderful things like that,” he added.

“18 architects, all indigenous, all with unique stories but with the common thread of how they applied their indigenous worldview and culture in their architecture, in their art of creating buildings and spaces,” added Cardinal.

He would create the Canadian Museum of History in Gatineau, Quebec, across from Parliament Hill, as well as many other projects across North America.

However, bringing this exhibit to Edmonton is something special, he said.

â€œI am absolutely in love with my culture, totally,â€ said Douglas Cardinal from the podium.

â€œI want to share this love with everyone I can.

Music in the spotlight – BC Catholic